Lut Desert in Iran is the hottest place on Earth

The hottest place on Earth as of 2005 is in the Lut Desert in Iran at 70.7 degrees Celsius.

The hottest place on Earth as of 2005 is in the Lut Desert in Iran at 70.7 degrees Celsius. This inviting region is abiotic – meaning without life; not even bacteria have been found. The specific hot zone, covering 480 square kilometers is called Gandom Beriyan (the toasted wheat). The high temperatures are party as a result of the dried, black lava rock which absorbs the heat of the desert sun – kind of like walking across a 480 kilometer bed of coals! Kilometers and kilometers of mountains and sand fill corridors between high ridges of rock and 150 meter tall sand dunes.

Coming in at a distant second for hottest place on Earth is Death Valley in  California reaching up to 56.6 degrees Celsius on occasion. El Azizia in Northern Africa reached a blistering 66 degrees Celsius in 1922.

Some of you may be wondering what effect global warming is having on the hottest temperatures on the planet. All the national science institutes of the major industrial countries agree that it is happening. Estimates are that the climate will rise in temperature  from between 1.1 to 6.4 degrees Celsius over the 21st century. Expect these records to get broken. 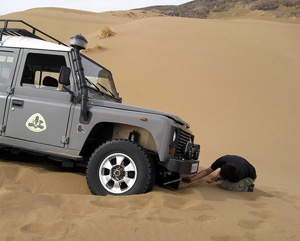