Ramsar is the westernmost county and city in Mazandaran. It borders the Caspian Sea to the north, Gilan province to the west, Qazvin Province to the south, and

Ramsar as the greenest part of Iran is located in Mazandaran Province in the north of the country. This city was formerly called Sakhtsar and many years ago was renamed to Ramsar. This city which is the last city in the west of Mazandaran, is considered as the border between the two provinces of Mazandaran and Gilan and perhaps that is why most of people in Ramsar speak with Gialk dialect instead of Mazani. The city of Ramsar is confined to Tonkabon from the east and from west to Chaboksar, from south to Alborz Mountains and from north to the Caspian Sea. The existence of cone-shaped peaks covered with various plants, gardens, farms of citrus fruits, tea and rice, its beautiful beach, pleasant summer climate zones, abundant sources of spas, has turned this city to a unique area. The proximity to the forest and the sea granted special beauty to this city which appeals to tourists during summer and holidays. Major products of Ramsar are rice, citrus fruits and tea. Ramsar in the west of Mazandaran with its unique natural and historical attractions, is one of the top regions in terms of ecotourism and annually receives more than 10 million travelers and tourists from inside and outside the country. Waterfalls, hot and cold spas, forest parks, caves, springs, lakes, historical monuments, hundreds of natural residences , caterings and recreational facilities, especially near the mountains made this region an important hub of tourism in the country and even in the world. The economy of this city is based on the industries of agriculture, livestock and tourism.

Rostamdar was the name for Rouyan territory which covered the regions of Amol to Sakhtsar. The region of Sakhtsar was composed of several villages, each with a separate name and the sum of these villages formed the block of Sakhtsar , known as the village of Sakhtsar afterwards. Several opinions are expressed for the appellation of this village. Among them, one says since the people of this area didn’t obey the ruling tyrants and showed tenacity, this place was called Sakhtsar (Sakht means hard). In the written documents of the eleventh and twelfth century AH, the word of Sakhtsar can be seen. Initially, Sakhtsar was under the obedience of the governors of Gilan and Mazandaran ,afterwards there was fighting between the rulers of Rostmdar and Rouyan in 640 AH over some disagreements and the city of Agim retreated to Namakabroud, since then Sakhtsar and Tonkabon jointed the territory of Gilan government. During Mid-eighth century AH, Sakhtsar had an isolated government ruling by Seyed Rekabzan in the year 750 AH, but during Zand period, Sakhtsar and Tonkabon were again annexed to Gilan regions and the entire Gilan had one government.   With the advent of Qajar dynasty, once again these two regions were separated from Gilan and annexed to Mazandaran, no changes have been noted in this case up to now.  Sakhtsar had little scope in 1933 and was one of the blocks of Tonkabon , finally the Council of Ministers changed the name of this region  to Ramsar in September 1935.

Ramsar has hot and humid weather in summer and cold weather during the winter. The proximity to the sea and forest has granted a special beauty to the city. This region has beautiful countryside and its average annual temperature is about 12 degrees and the average annual rainfall is 1200 mm.

Indigenous peoples of Ramsar speak with Gilak dialect which has the same root as Persian. The Gilak dialect of Ramsar people is closer to Persian compared by the main Gilak dialect. Indeed, in the city and its surrounding villages, people have different dialects and also use a variety of verbal cues. At different points of the region, when you hear these dialect, its phonemic changes can be fully felt. Since Ramsar is situated between the two regions of Gilan and Mazandaran, has its own dialect composed of the dialects of Mazandaran (Tabari) together with  the dialect of Gilan (Dailami and Taleshi) and the mix of these two dialects is called Gil Mazy.

A large part of the city of Ramsar benefits from hot springs with mineral and therapeutic usage and lots of tourists and local residents enjoy these springs every year. Hot springs are also known as sulfur springs in this region and are located in places like Javaherdeh, Katalom, Sadatmahaleh and the city of Ramsar. In addition to their therapeutic features, they also provide beautiful landscape and spectacular environment for tourists. The series of Ramsar hotels, local municipalities and the private sectors have provided a good place for travelers and local people through the establishment of a swimming pool, shower and multiple baths. There are several bathtubs and mineral hot springs in cities of Katalom  and Sadat , five kilometers of southeast of the city of Ramsar , which are beneficial to treat skin diseases, rheumatism and neuralgia and muscle diseases.

Javaherdeh is a summer quarter, located 27 kilometers from Ramsar and at an altitude of 1800 meters above the sea level. The access to Javaherdeh is from the west end of the city of Ramsar, by passing through the wooded mountains and along the river of Safaroud. Javaherdeh village is welcomed by the tourists in summer due to its cool weather and accommodation facilities. The historical village of Javaherdeh is a green area with forests, and is covered with snow for half of the year. This area with its pleasant weather and wonderful landscapes is the masterpiece of nature and the turquoise of Alborz Mountains. In addition to its natural beauty and abundant springs, it has a long history and its archaeological cemeteries are the evidence for this claim.

Due to its snowy mountains and abundant rains, Ramsar has several beautiful and spectacular waterfalls with nice and natural landscapes. There are many steep slopes and rivers in the wild mountains of Ramsar which formed large and small waterfalls. Except one or two waterfalls which are located in the road of Javaherdeh , the rest are in remote areas that most people are unaware of them. These waterfalls have wonderful and magnificent environments in all seasons of the year, some of them are mentioned as follows:

The access route to this park is situated in the beginning of Javaherdeh road in the west of the city of Ramsar.  You will reach this park near Safaroud River after passing 9 km with a beautiful scenery. The park is located at the valley down the road with several stairs built for the entrance. Roads and forests, rivers, mineral water, pleasant weather have granted special effects to this place.

Markooh peak is cone-shaped, wooded and isolated from the range of Alborz Mountains. It is situated six kilometers east of Ramsar and three kilometers from the beach. This rocky mountain with an area of 600 thousand square meters is covered with a variety of shrubs and various trees such as hazel and oak. The peak height is 260 meters above the sea level and 330 stairs on its south side makes it easy to climb. The beautiful landscapes towards the sea, rice fields, tea and citrus gardens in the north of the peak, green hills and the mountains of Alborz have granted special natural position to this area. There are also the remains of an old castle on the highest point of this mountain which were likely to be the watching tower for past rulers.  In the middle of the castle, there is an underground tunnel which leads to a garden near the beach, which is said to be an escape route in an emergency. Currently the entrance to the tunnel is blocked.

Ramsar Airport has only the capability of flights to Tehran and Mashhad. These flights are carried out by the airline of Aseman.

Ramsar has no linkage to the railway and the nearest station to this city is Sari station.

There are bus routes between Ramsar and the cities of Tehran, Rasht and Sari. 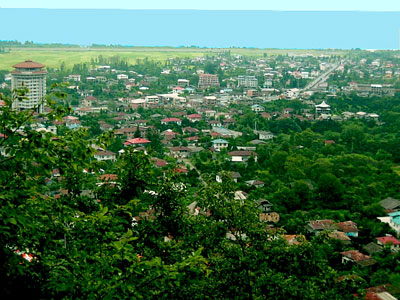