The arts of Iran have been woven into an amazing complex called Golestan palace that has been so amazing and worthy to be inscribed as a UNESCO world heritage site. Golestan Palace is a bless in the heart of the busiest part of Tehran like a spring in the middle of the desert and a gate to enter a small paradise that frees one from the noise and leaves one in the hands of the beauty of the patterns and designs. It takes you back to the past thanks to the colored tiles and the reflection of the mirrors. This complex is almost 500 years old and has gone through several dynasties. Golestan Palace is a remnant of the Historical Citadel of Tehran (Arg) whose construction dates back to the Safavid period, which was rebuilt during the Zandiyeh dynasty, and in the Qajar period it flourished again and became the main residence of the Qajar kings. During the Pahlavi period, some official ceremonies such as the coronation of Reza Shah were held in this palace. It was expanded during the era of Naser al-Din Shah and went through many changes. In 1806, Fath Ali Shah Qajar ordered the famous sculptors and masons of Isfahan to build a throne from Yazd yellow marble so that it will always remain in the middle of the  porch. Adorned by paintings, marble-carvings, tile-work, stucco, mirrors, enamel, woodcarvings, and lattice windows, the throne enjoys the finest of Iranian architecture. This Marble throne consists of 65 large and small marble pieces. It was designed by Mirza Baba Shirazi, and the sculpting was supervised by Mohammad Ebrahim Esfahani. The throne consists of 5 pieces of smooth marble with a thickness of 12 cm which are connected from below, 7 pieces of stone in the stairs, 21 pieces of stone in the pillars, bases and columns, 21 pieces in the statues carrying the throne, and 12 pieces of marble in the small statues around the throne and it is placed on the shoulders of 3 demons and 6 angels or humans. In the middle of two stairs, on the vertical surface of the stairs, a dragon is carved, and on the sides of the first step, there are 2 lions. The last big ceremony held here was the coronation of Reza Shah in 1925.

The art of mirror work is considered one of the most elegant and important architectural decorations in the Islamic-Iranian civilization. Basically, mirror work is the art of creating regular, symmetrical and geometric designs using large and small mirror pieces, which It is used to decorate the interior surfaces of a building. The first example of mirror art in Iranian architecture is the decoration of the luxurious house of Shah Tahmaseb Safavid 1524-1576 in Qazvin city. One of the most famous parts of Golestan Palace is Hall of Mirrors. This hall is located north of Golestan Palace and west of Salam Hall. It was designed and decorated by Sani al-Mulk and built by Mirza Yahya Khan Motamedul Mulk Wazir during the reign of Naser al-Din Shah. Starting the construction at 1875 Sani al-Mulk was able to build this hall in three years but it took nearly 4 years to complete the eye-catching decorations and mirror works.

Around 1891 Naser-al-din Shah ordered the construction of this building so that he can store the precious gifts he was receiving from Ottoman king Sultan Abdul Hamid and others but from the very beginning of its construction, Abyaz Palace was dedicated to the meetings of the government board. Meetings were held in this palace and in Sultan Abdul Hamid Hall until 1954. In 1965, to prepare it for the coronation of Mohammad Reza Shah Pahlavi in 1967, there were changes in the west side and the lower floor of the building, and from 1968 until today, it became an anthropology museum. This building was called Abayz Palace because of the white color of the facade of the building, which was plastered and made in the style of 18th century European buildings, and also because the stairs of the palace were streaked with white marble. The ground floor is reserved for administrative departments and theaters, while the second floor is dedicated to the exhibition of costumes of Iranians of different ethnicity during Qajar dynasty. In each of the rooms of the museum, you can find various musical instruments that are all related to the Qajar period. You can also visit various documents related to that period. For example, the marriage certificate of the Qajar prince, Hasan Ali Mirza and his wife with a dowry worth 900 Tomans!

Inaugurated in 1867, the Shams-ol-Amara mansion was the tallest building in Tehran during the reign of Naser-al-din Shah and "the sun of royal mansions" which is considered the first symbol of Tehran as the capital of the country. As a magnificent building it is displaying the art of Iranian architecture mixed in European style for the first time. Shams-ol Imareh has 96 steps from the ground to the top, and its height is 25 m, which comes to a total of 30 considering the height of pavilions. The first public clock of Tehran was installed on top of this building and was a present to Naser al-Din Shah's palace from Queen Victoria of the United Kingdom. The and the first telegraph was also transmitted from this building. In the construction of this modern Qajar mansion, metal columns were used, to be recognized as the first metal structure in Iran.

Golestan Palace is one of the largest sites of the Qajar period hosting about 7 thousand square meters of tiling in different techniques. In fact, Golestan Palace can be referred to as a tile museum since various tile techniques including Haft Rang, Moaqli, Maraq, Zarin Fam, Embossed and other tiling techniques are used in one place and this collection is the best site for conducting comparative studies in the field of tiles. Most of these tiles date back to the Qajar period, so it is a combination of Iranian and European motifs. There is a style called Isfahani style where we see the emergence of the flower of European designs in tile work. The variety of content is remarkable considering that it is both European and Iranian. In the entrance hall, all the tiles are different from each other in terms of content including the stories of One Thousand and One Nights, Salam ceremony of Naseruddin Shah and other Iranian stories. Most of them depict legendary characters, kings and legends of Iran. Some tiles of this section of the Palace are executed in black and white and the color is taken from them.

The gallery consists of two sections. The south section is dedicated to the display of early Qajar period paintings, and the works of painters such as Sani al-Mulk, Mazin al-Dawlah, and Ostad Mirza Baba can be seen here. The northern part of the gallery is dedicated to the display of paintings of the late Qajar period, where you can see paintings by Kamal al-Mulk, Musar al-Mulk, and Mahmoud Khan Saba. Portrait images of almost all Qajar kings are displayed here though Naser al-Din Shah's contribution is the most. A famous painting by Kamal al-Mulk, which depicts Nasir al-Din Shah and Muzaffar al-Din Shah Qajar at different ages, is one of the interesting paintings in this section.The famous picture of Amir Kabir by Mohammad Ibrahim Naqashbashi, Naseruddin Shah's interior, the Naseri hunting ground, the paintings of the palace and the Shahristan fountain by Kamal al-Mulk are other interesting paintings.

In 1819, Iranian ambassador Mirza Abulhasan Khan arrived in London with a diplomatic mission from the Shah of Iran. He brought gifts including jewels, ornamental swords, beautiful carpets, paintings and Arabian horses for the king and the royal prince - an image captured by the artist Henry Chalon. In return, gifts were ordered for Fath Ali Shah. Royal glassmakers of Ludgate Hill designed custom made chandeliers or candelabra sets for gifts to the king intended to decorate the newly refurbished Golestan Palace in Tehran. At the behest of John Blades and with the permission of the East India Company, Edward James Matthews set sail from England to Bombay in October 1820, tasked with accompanying the cases of fine glassware.

In Yazd, Master Hossein Hajarbashi spent four years building this marble tombstone and carved the statue of the king on it. He carved a 12-verse poem in his mourning around this stone and decorated it heavily. But the end of these four hard years was just the beginning of the story of this stone as no one thought of the heavy weight of a large piece of marble, a one-piece marble stone with a length of two meters, a width of one meter and 25 cm, thickness of 90 cm and a base decorated with pearls. In order to transport this stone from Yazd to Tehran, it was decided that the officials and nobles would line up on the path of the stone and the farmers in each village would roll the stone on wooden beams.
Watch Now!

The Marmar Porch Orsi (sash) consists of five panels and opens upwards in the form of a drawer. Architectural decorative elements of the Qajar period of Tehran can be seen prominently in its palaces. Among the decorative elements are Orsi or sashes that have a special design and role. All the designs of these sashes are curved. These designs consist of the main motifs of Boteh, Chaharpar, and Framing and Flower designs, which are used in most of the arts of the Qajar period. At least from Safavid dynasty, Orsi windows were a kind of luxurious decoration which was used in different places like houses, Mosques and schools in Persia.

How to Get there

If you want to go to this palace by car, keep in mind that the streets leading to Golestan Palace such as Bab Humayun, Sur Esrafil, Davar and Sabzeh Square are paved and vehicles cannot travel in this area. So you have to park your car in the surrounding streets and walk the rest of the way. Also, this part of the city is within the scope of the traffic plan. The best way to get to Golestan Palace is by metro, you have to go to Panzdeh Khordad station and you will see Golestan Palace with a short walk. Another way is the bus, which you should use the lines that cross Khayyam street and stop at Galobandak station. Taxis from all over Tehran will take you to Galubandak intersection.

Visiting hours are from 9:00 am to 6:00 pm roughly from April to September and from 9:00 am to 5:00 pm during other months, and the ticket offices are open until 4:30 pm. You need at least three hours to visit this complex. 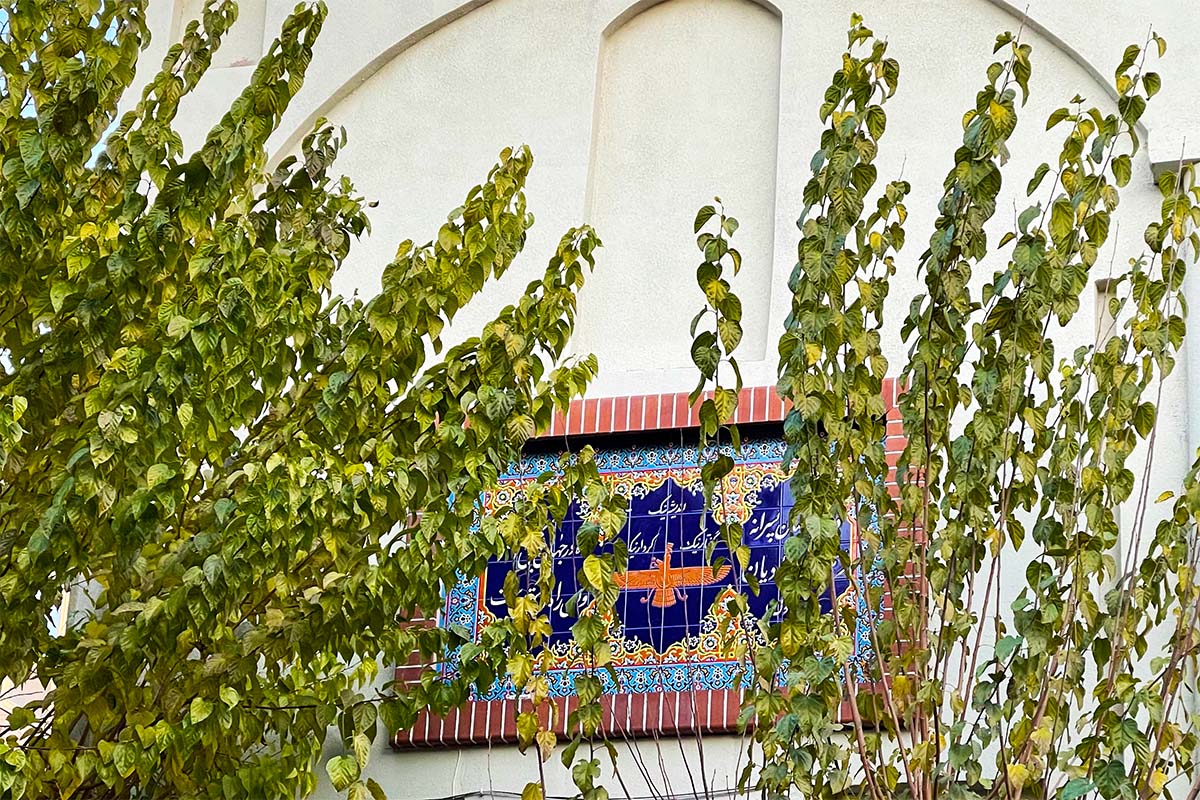 You can book one of our daily tours in Tehran that includes exploring Golestan palace and visit this beautiful monument by the help and local knowledge of one of our professional tour guides in Tehran.
https://www.uppersia.com/iran-day-tours/tehran-tours.html
Feast Your Eyes on the Persian Art of Tilework : V...
Iran Trip Puts Less Pressure on Pockets + 4 Reason...