Many special and valuable objects are kept in different parts of the Iran National Museum that we mentioned earlier. In the following, we will introduce some of them.

From the Paleolithic era, which was the era of hunting and food gathering, many tools such as different scrapers can be seen in this museum. Tools made of flint, fossil remains of animals found in caves, tools for breaking animal bones, carving wood, and everything that early humans produced for survival are kept in this section.

The Bronze or Bronze Age (3000 to 1500 BC) is a period in history in which the widespread use of bronze alloy (a combination of copper and tin) was formed. Hence objects made of bronze are seen a lot in this section. Such as dishes, war weapons, horse saddles and harnesses, human and animal figures, decorative and ritual works such as brooches, armbands, necklaces and headgear.

The works that can be seen in this section are collected from different parts of Iran such as Kurdistan, Sistan and Baluchistan, Kerman, Lorestan, etc. and are kept in this museum.

Elam is the most well-known Iranian civilization that was founded in the southwest of Iran (Khuzestan and Fars). The history of Elam civilization is divided into four parts: the beginning period of Elam, old Elam, middle Elam and new Elam. The Middle Elam period is the peak of the glory of this civilization and many artifacts from that period are kept in the Museum.

Important works that can be visited in this museum from the Elamite period are the clay figure of a cow with an inscription on its post, glass pipes, brick inscriptions and studs with inscriptions.

The Iron Age is the boundary between the Bronze Age and the Achaemenid Empire. The reason for naming the Iron Age is to know how to melt iron metal and its various uses. Although the use of bronze is still very popular in this period, the familiarity with the use of iron is considered a great revolution; Especially in the field of making war tools and ornaments.

Among the important works obtained from that period are the works of Amarlo, Clovers, Marlik and Amlesh (Gilan), Silk (Kashan), Qaytarieh (Tehran), Khorvin, etc.

During the Achaemenid Empire, which was formed roughly 2500 years ago Iran or the land of Pars was in its widest geographical form. Darius the Great minted coins for the first time in Iran during this period. Metalworking and stonework also reached their peak. Great Persepolis is also a proof of this.

The figure of a sitting lion and the stone statue of Darius the Great are two examples of the most important objects of the Achaemenid era that are kept in the Museum of Ancient Iran. These objects were brought to this museum from Fars and Susa.

The Seleucid period is the period of popularization of art and culture. In this period, using the raw materials that were known until that day, the production of figurines, coins, and various inscriptions began. Among the works from this period, we can mention the bronze face of a Seleucid soldier and the memorial stone of Laodicea Temple in Nahavand.

Many valuable objects from the Seleucid and Parthian periods are preserved there, which were collected from different countries and showed the extent of Iran's sovereignty in these periods.

This part was inaugurated at 1996 and consists of 3 floors. The first floor is the meeting and temporary exhibition hall. Works and objects of Islamic culture, Islam art in relation to objective and periodic method are collected in the second and third floors. The objects selected for this large museum, are mostly selected out of excavation or from prominent collections.
In designing this museum, instruments related to architecture of historical buildings are presented, at the same time, to explain their actual position.

Central part of this large museum in a rectangular space appropriated to the treasury of  Qur'an belonging to the 10th to 14th century.

At surrounding of Quran Museum, at an adequate distance, 20th hand written books such as scientific, literary and historical books are presented with a periodical and subjective classification.
Painting And Calligraphy
On the lateral walls of the central space, one may see the valuable works of miniature and calligraphy consisting, school of Shiraz, Isfahan, Harat, India and Mongol as eternal works of calligraphy stars namely Mir Emad, Mohammad Saleh, Mir Ali and Abdolmajid.

You may find various kind of astrolabe global and flat from 11th century until the end of Qajar era, the most ancient astrolabe belonging to 1170, made by Mohammad Ben Hamed Isfahani.
Glass works and Medical Instruments
One may consider the climax of the art of glass blowing during the primary centuries of Islam until Seljuk era.

Hall of Clay and Ceramic

In this section one may see the evolution road of pottery art and its ups and downs from the first centuries of Islam until the end of Qajar.

Various fabrics of Islamic era such as silk, brocade and hand-woven such as braid Knitting, quilted sewing. Together with carpets and prayer rugs of epigraphic, prayer-niches, shawl and medallion designed knitting, all works of 15 to 19 century AD.

On the third floor of the museum, various works of Islamic era considering their historical evolution, with due stress on architectural ornamentation are presented. You will find coins of different periods, mentioning names of caliphs and location of minting as most important historic documents.
Pavilion of book selling
This hall is also located on the upper floor of museum where you may find miscellaneous books about pottery, architecture and craft for sale. One may purchase poster, designs and brochures in this pavilion 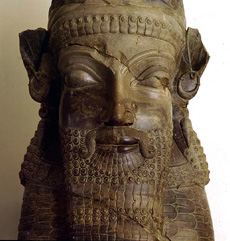