We were lucky to Spend 3 days in Shiraz last May but considering the number of monuments for sightseeing, the hospitality of locals and the amazing weather of Shiraz during May made the city so mesmerizing that we want to visit it again if we have a second chance to take a trip to Iran. Shiraz is a must-see and inspiring places such as Persepolis, Naghsh-e Rostam, Firuzabd, Bishapur and hospitable nomads such as Qashqais are around this city.

by an international traveler

If you go through the comments and feedback of travelers who have visited Iran and have dedicated some amount of time to visit Shiraz and its vicinity, you will find great admiration like what we have mentioned above. We will go through the reasons for this admiration. 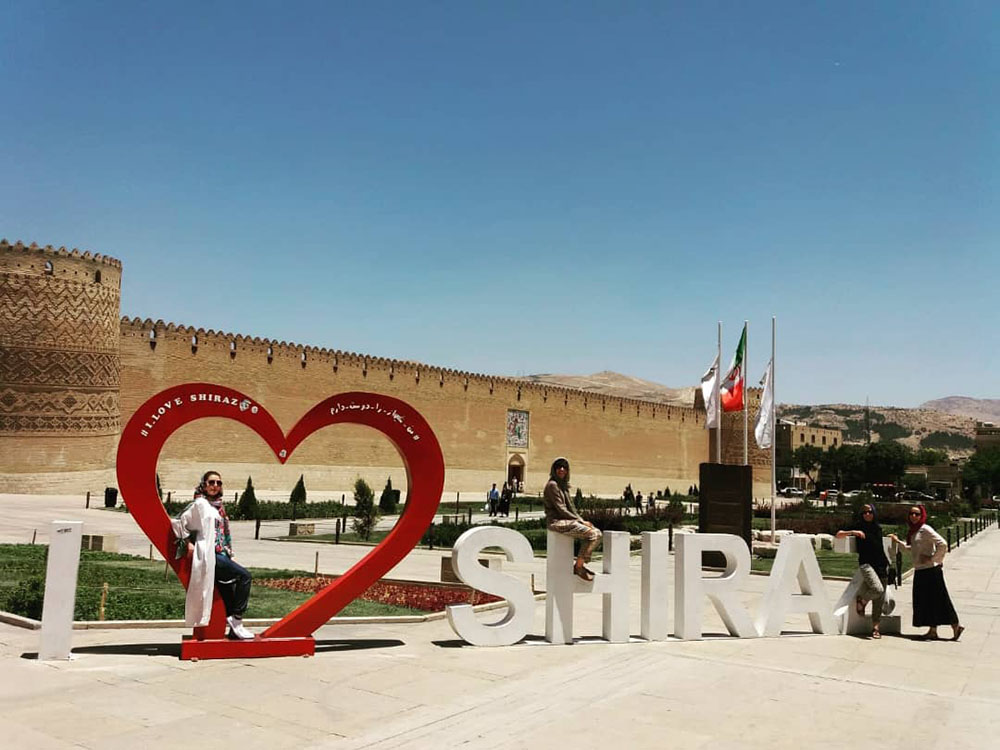 Shiraz is one of the most historical cities in Iran, which has become a popular destination for tourists due to its numerous and magnificent monuments and also the pristine nature that is full of green gardens. The most important tourist attraction of Shiraz, which attracts many foreign tourists, is Persepolis. If you are planning a trip to Shiraz, it is better to have information about the well-known places of Shiraz in advance and have a list to visit different places. Don't miss visiting below attractions while you are in Shiraz. 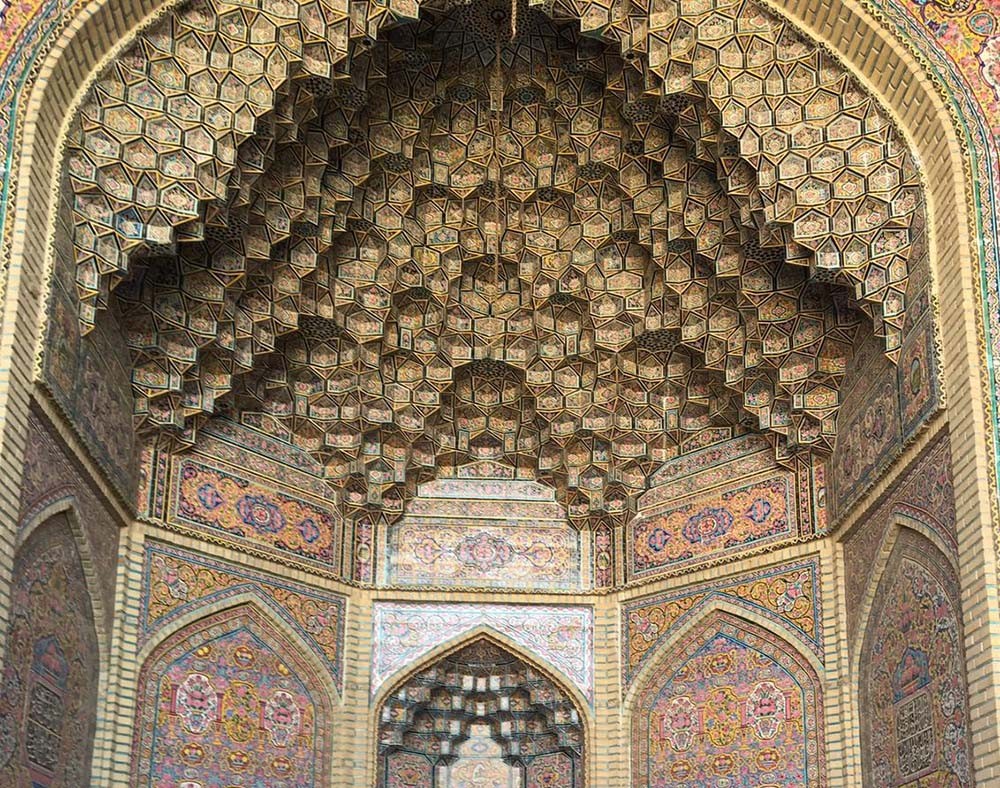 Known also as Pink Mosque, it is one of the popular monuments to visit in Iran and Shiraz and is a must-see for people who love architecture and art. It is built during Qajar dynasty and though it is small in size you can see a lot of details and beauty all around the place. If you choose the right time to visit the mosque you can also take amazing photos. 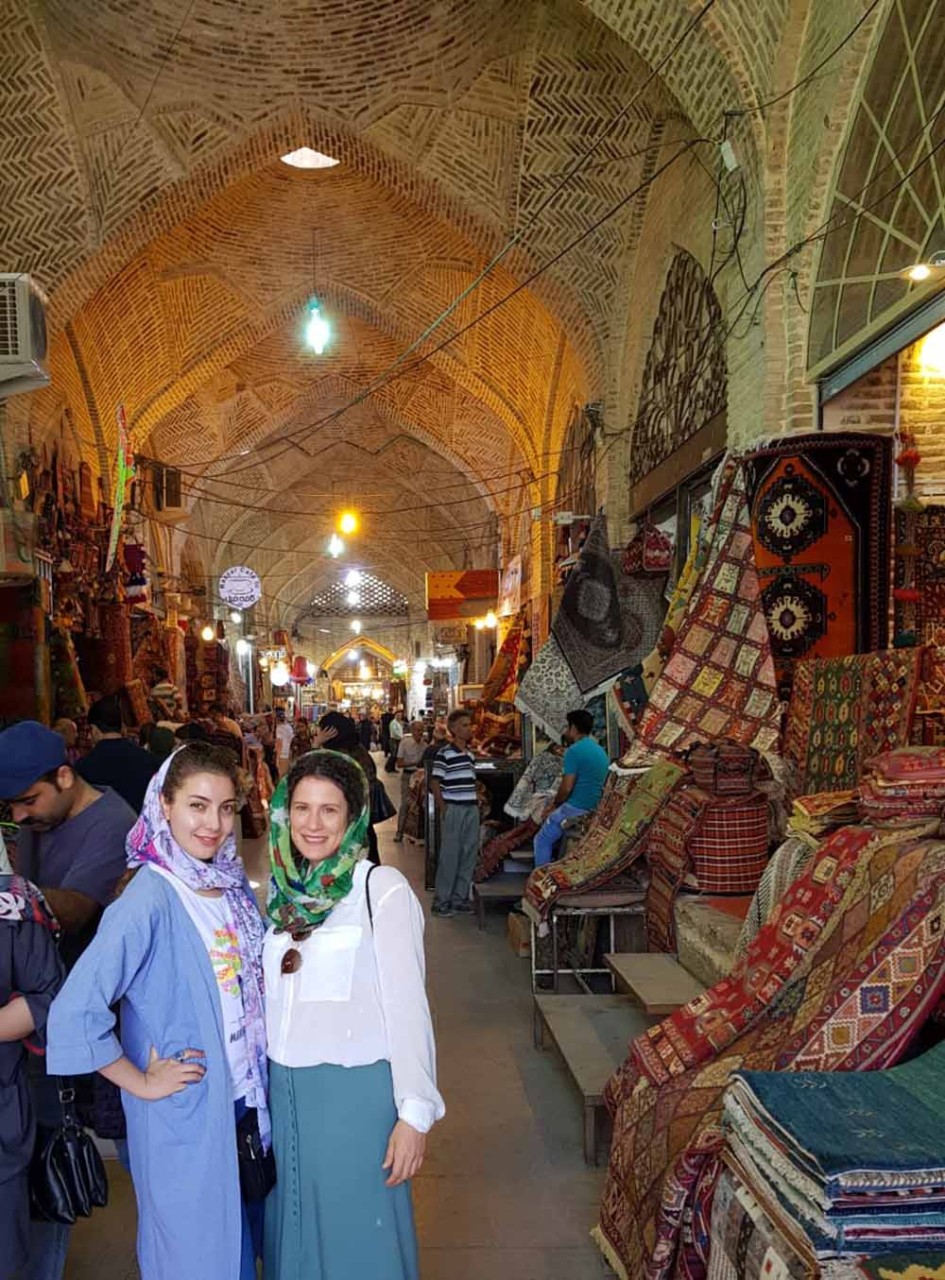 Vakil Bazaar is considered as one of the most ancient bazaars in Shiraz . This Bazaar, which consists of two lines, north and south, has a unique architecture and attracts everyone's attention. Various old stalls and shops are operating in this market where you can buy souvenirs and gifts. It was set up during Zand dynasty and the Caravansarais and halls inside and around the Bazaar host nice cafes and shops to enjoy and relax. 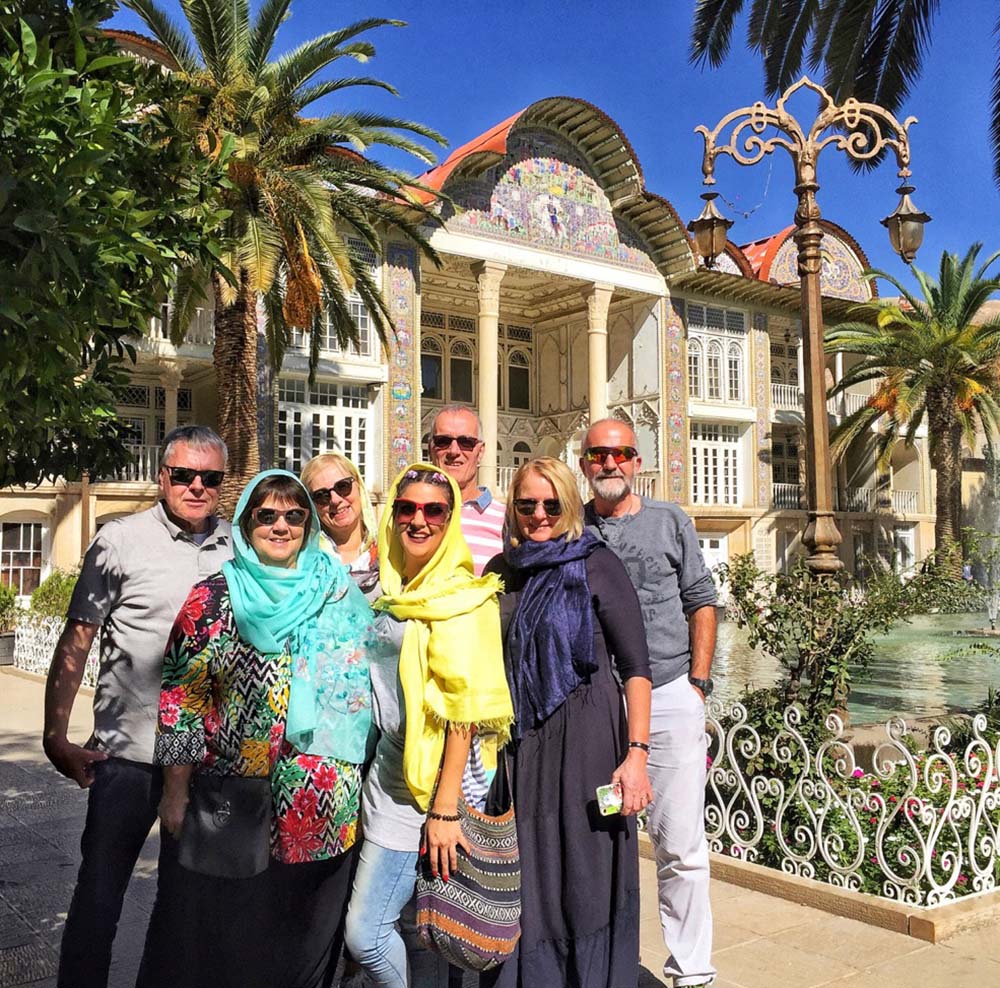 Another famous attraction in Shiraz that we recommend you to visit is the Eram Garden in Shiraz. This garden that is like a piece of heaven with its diverse trees and plants and it has also reached the world record with its beautiful historical mansion. Eram Garden is also considered as the botanical garden of Shiraz University and if you have a special interest in flowers and plants, you can visit this garden to see all kinds of flowers and plants of Shiraz city and Iran. 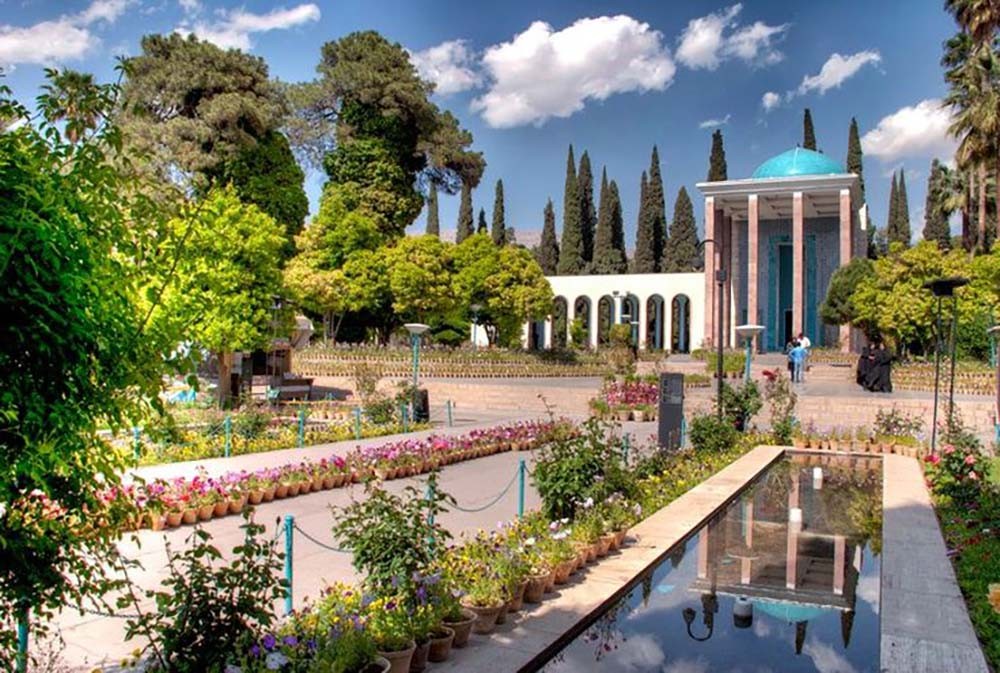 If you are into poetry and literature, you must know that the tomb of Saadi Shirazi which is located in the city of Shiraz. These days, Saadi Mausoleum has become one of the most important mausoleums in Shiraz that most people visit. In addition to Iranian tourists, foreigners also visit this mausoleum when traveling to Shiraz due to Saadi's global reputation. Saadi's tomb with its eye-catching architecture and l turquoise colored dome attracts everyone's attention. The pleasant green atmosphere in the tomb is another reason for paying a visit to this attraction. 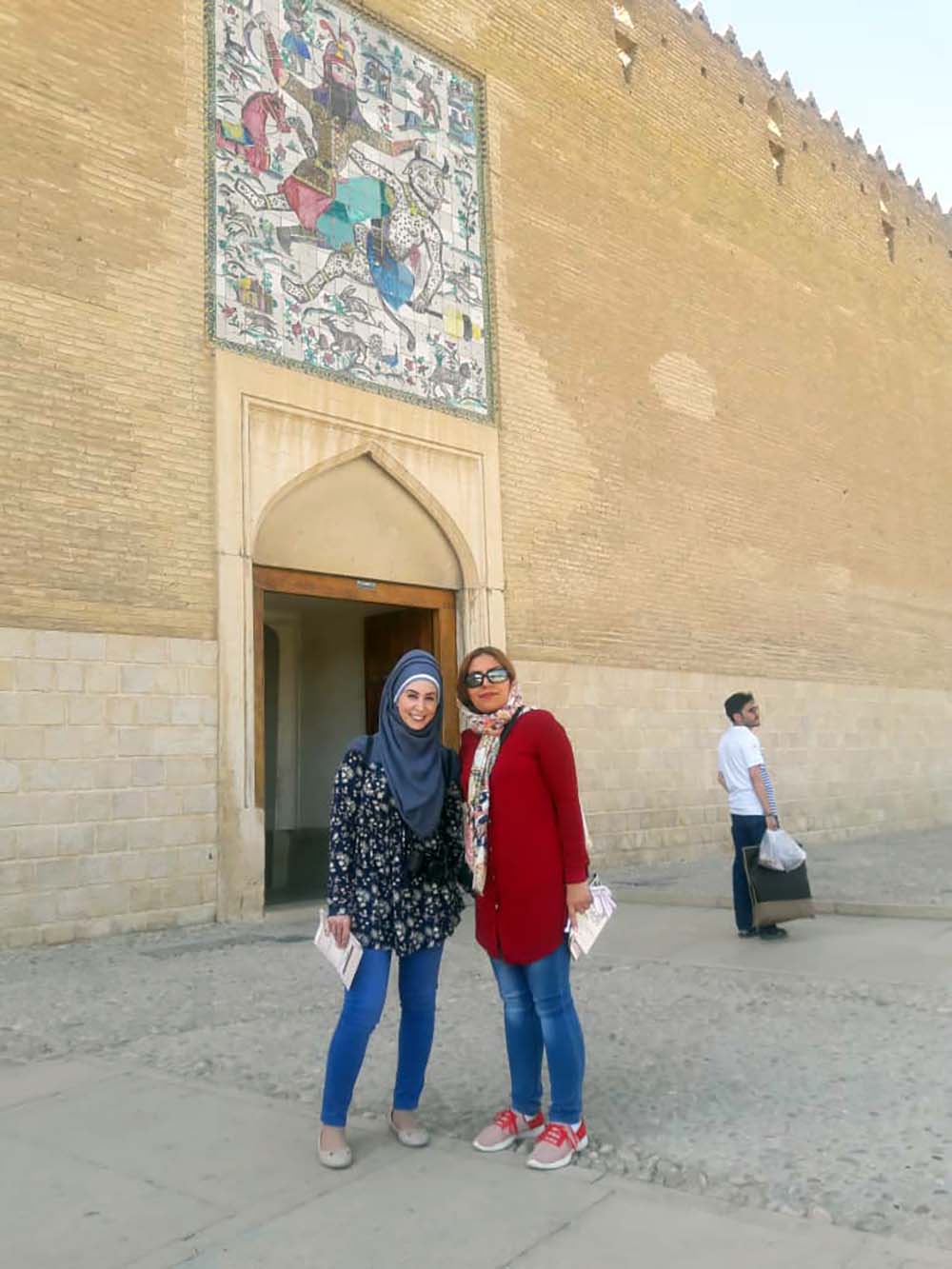 Karimkhan Citadel is one of the most important sightseeing in Shiraz. As the city of Shiraz is known as the city of history in Iran, this historical monument left in it from the previous dynasty. Karimkhan Citadel was built during the Zandiye period and its use was both military and residential. After a short period of time, Karimkhan Citadel has been converted to a prison, and today we can see that parts of it have been turned into a museum. If you travel to Shiraz, visiting this attraction is a must. 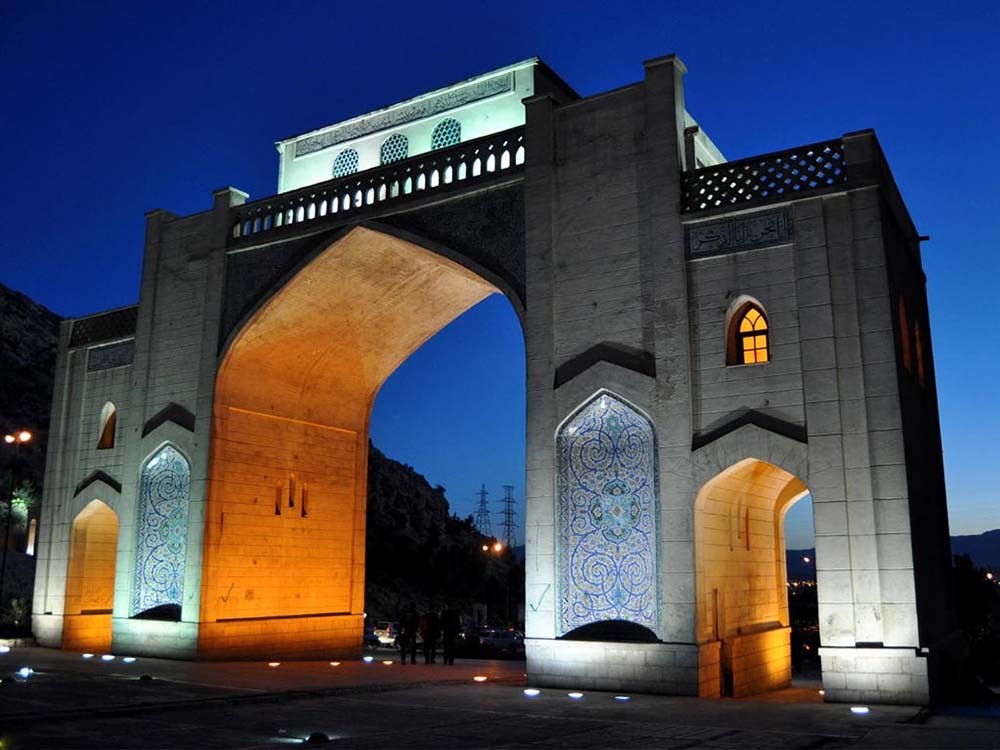 In the northern part of the city, Quran Gate is located. Other attractions are located next to the Qur'an Gate of Shiraz, which makes this ancient and historical monument more attractive. The artificial waterfalls which is built around the Quran Gate have also given it an immense beauty. Also, if you go to the Quran Gate, you can also visit the tomb of Khajou Kermani, which is nearby. 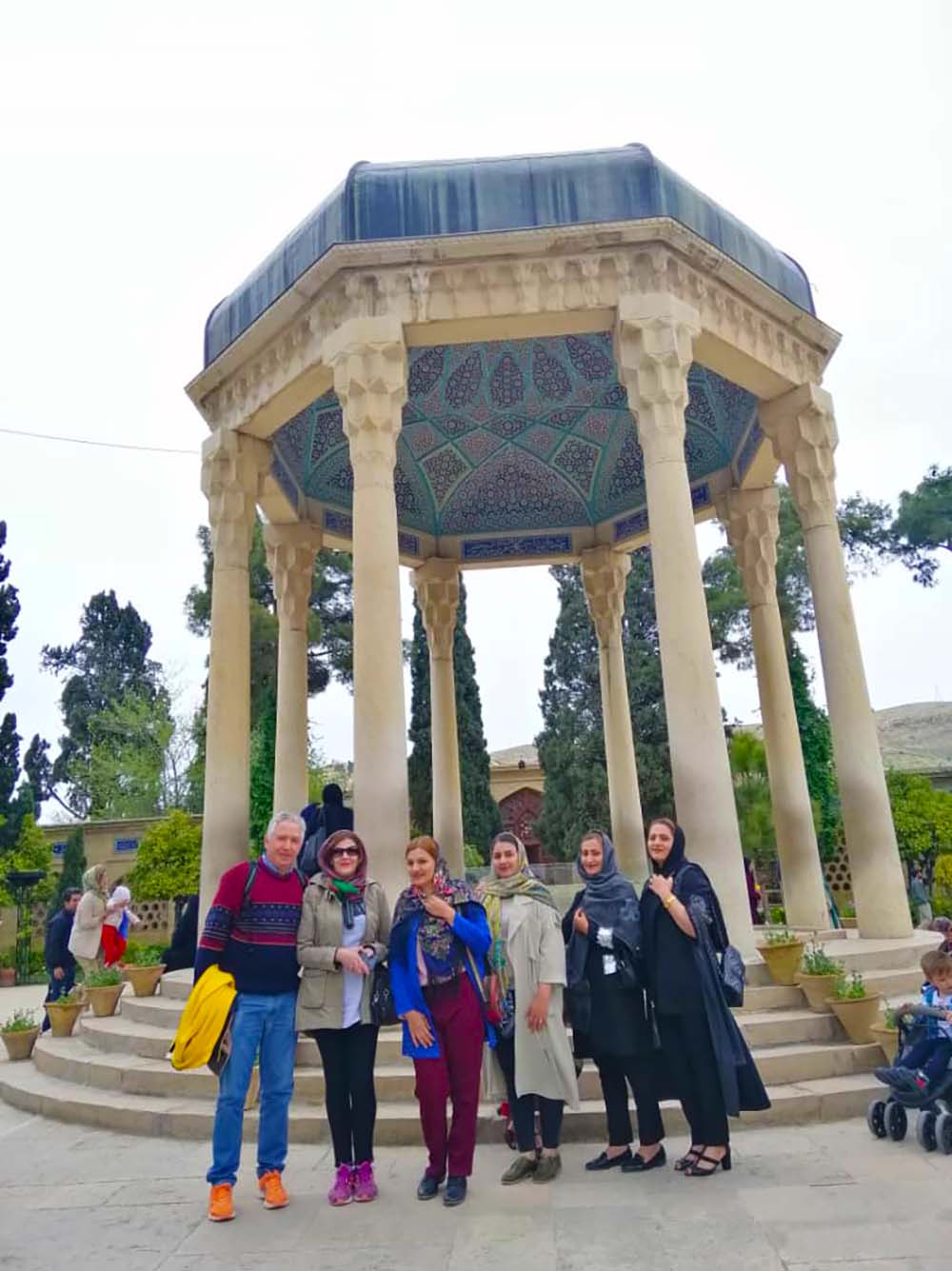 After the death of one of the greatest and most revered Persian poet,  Hafez Shirazi in 1390 during Timurid Empire, his burial place in Shiraz was a popular place worth a visit by Iranians and international travelers and different dynasties such as Safavids, Afsharis, Zands and Qajars built or restored its structure. When the Pahlavi dynasty came to power in 1925 the governor of Fars built a street in front of the cemetery, took care of the garden, and finally installed a large and stone headstone at one of the entrances of Hafiziyeh. In 1929, decisions were made to restore Hafez tomb, and it was decided to use the designs of Andre Godard, a prominent French archeologist and Iranologist, based on elements from Persian architecture and they set up a nice garden around the new structure that is what you can see today when you visit this place.

Traveling to Shiraz gives you the chance to visit some of the great UNESCO World Heritage Sites of Iran. 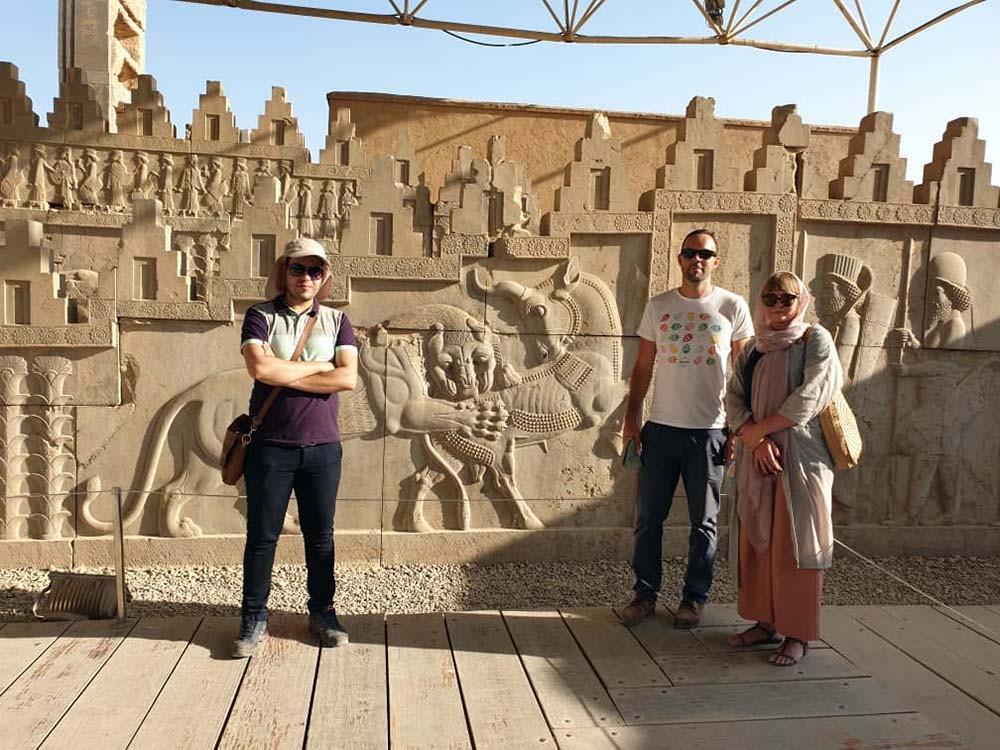 Persepolis excursion on an Uppersia tour

This UNESCO world heritage site is an icon of ancient Iran and one of the must-see places close to Shiraz. Persepolis is considered as one of the most important monument in the history of civilization in the world. Therefore, eminent scientists and archaeologists from all over the world have traveled to Iran to visit Persepolis. Takht Jamshid is the heritage of the Achaemenid kings in Iran since 2500 years ago. Considering the greatness of the Achaemenid Empire in ancient Iran, which included a significant part of the eastern part of the world, one can realize the glory of the headquarters of these kings in Persepolis. 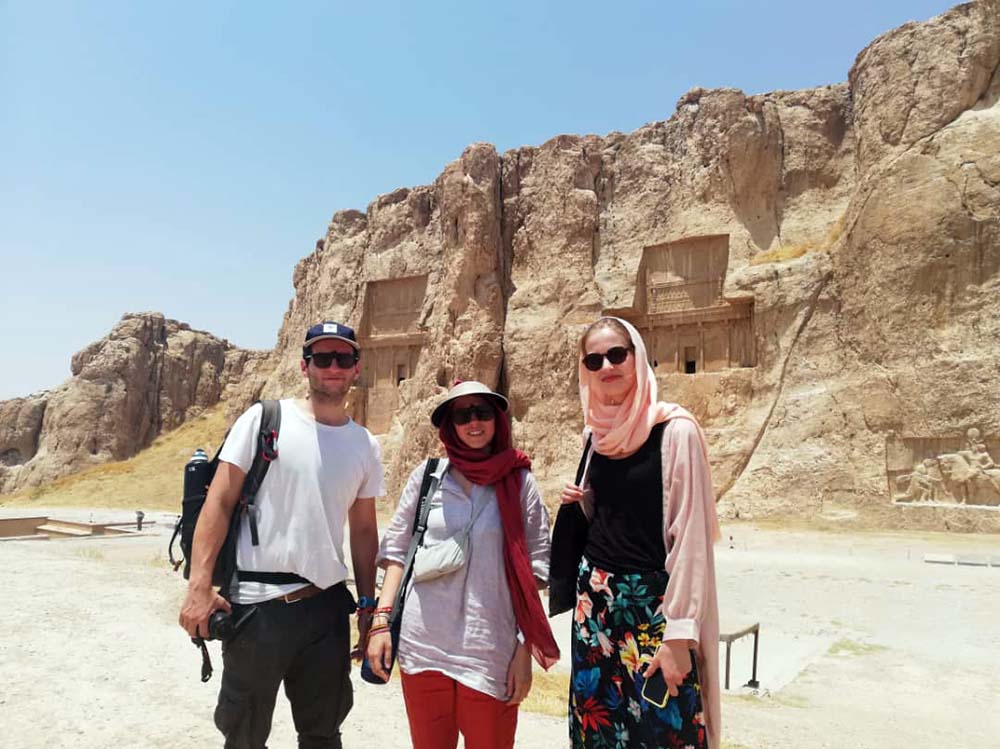 Naghsh-e Rostam is very important due to having works from three historical periods. First, a relief from the Elamite period was carved on the rocks there. Part of this bass-relief was later destroyed during the Sassanid era and replaced by the figure of Bahram II and his companions that shows this place has been the focus of different dynasties since 1200 BC to 650 AD. The peak of the importance of this area was during the Achaemenid period, where the graves of four of the great Achaemenid kings are located. Beside the Sassanid Bass reliefs another important building from that period is Zoroaster's Kaaba, which is located in the same historical area. 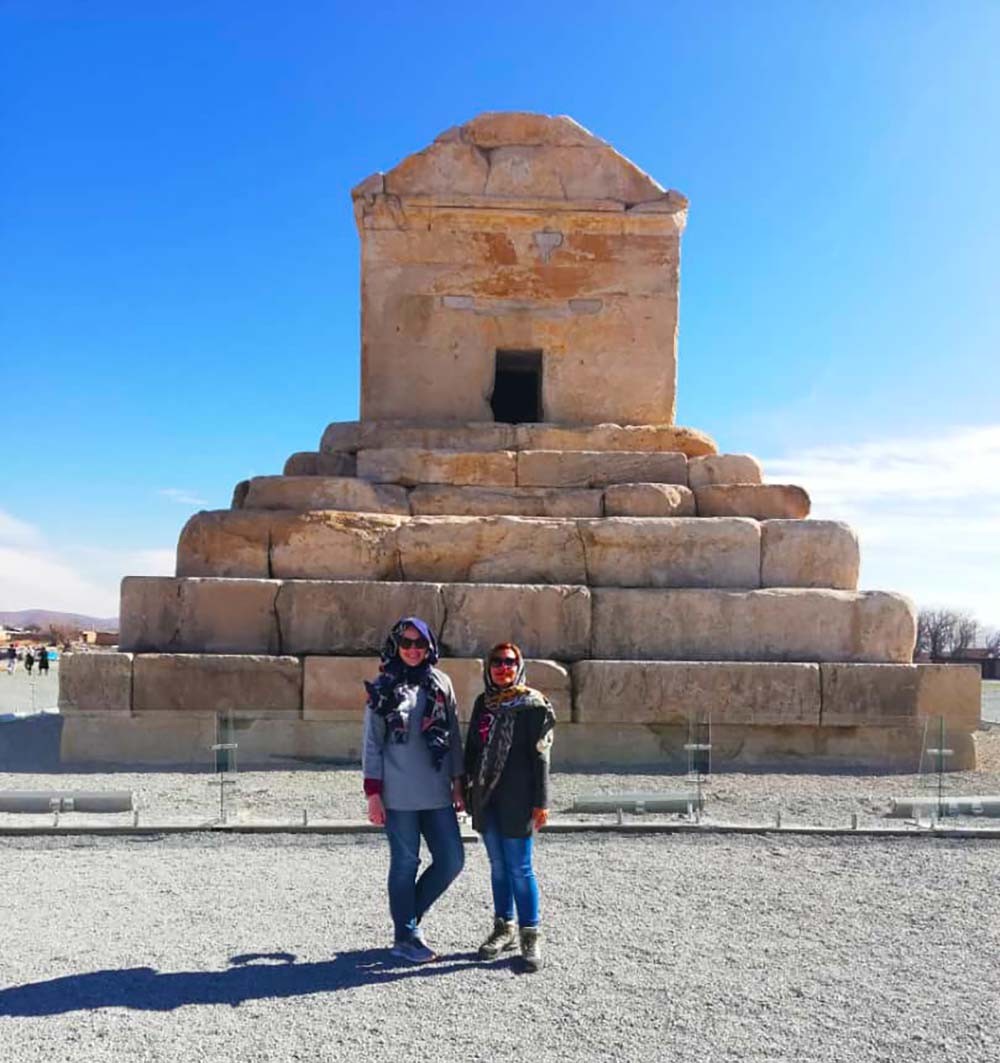 It is the first capital of Achaemenids and was established by Cyrus the great where you can also visit its amazing tomb. Cyrus the great established one of the greatest Persian gardens in his capital called Pardis as a truly Paradise. You can visit this place as an excursion from Shiraz or on your way from Isfahan or Yazd to Shiraz. 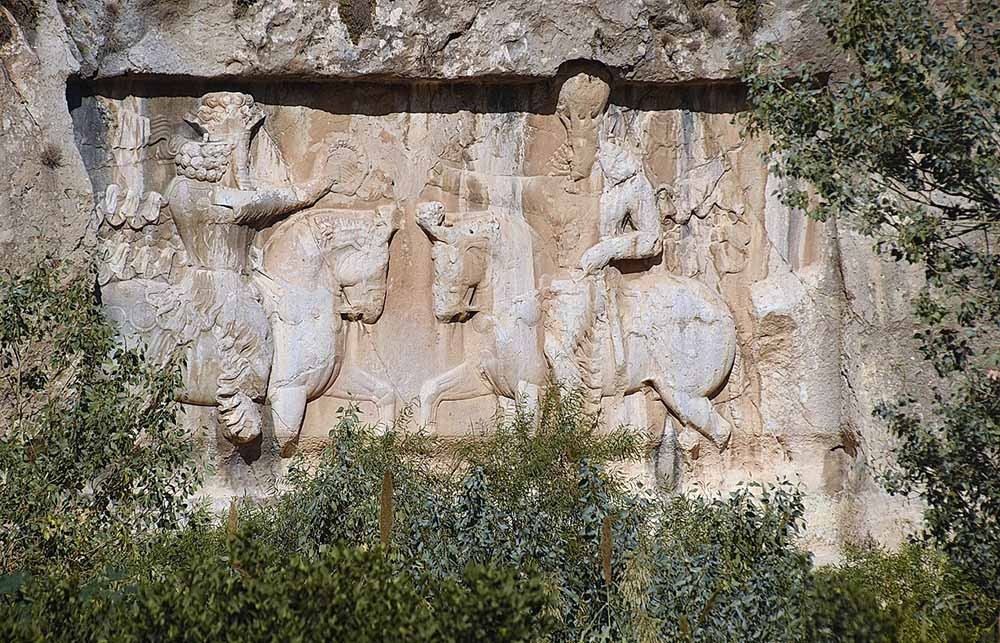 The city of Bishapur is located 25 kilometers from Kazerun and 120 kilometers from Shiraz. As a UNESCO world heritage site, it was one of the most important and prosperous cities during the Sasanian rule.
This city was built by the order of Shapur I after his victory over Valerian (Roman Emperor), so he gave his name to this city.
It is interesting to know that the history of the construction of this city is completely carved in stone and has remained intact. This city was built based on Greek architecture in the form of four gates and two streets that intersect each other and finally reach the city gates. 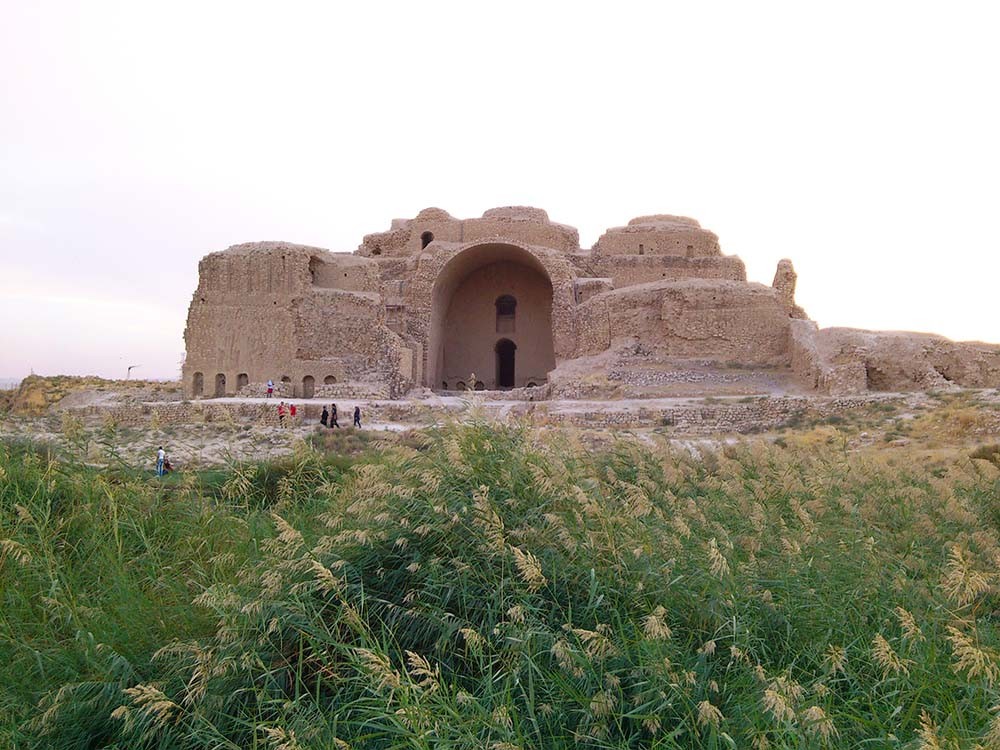 The city that is called Firouzabad today was the city of Gore before that. According to reliable historical sources, the city of Gor was built by Ardeshir Babakan the founder of the Sassanid dynasty and he made it his capital after establishing Sassanid dynasty. Beside its amazing Sassanid monuments, the Qashqai nomads live and move in the area and a lot of carpet weaving happens in the town where many nomads have settled down. 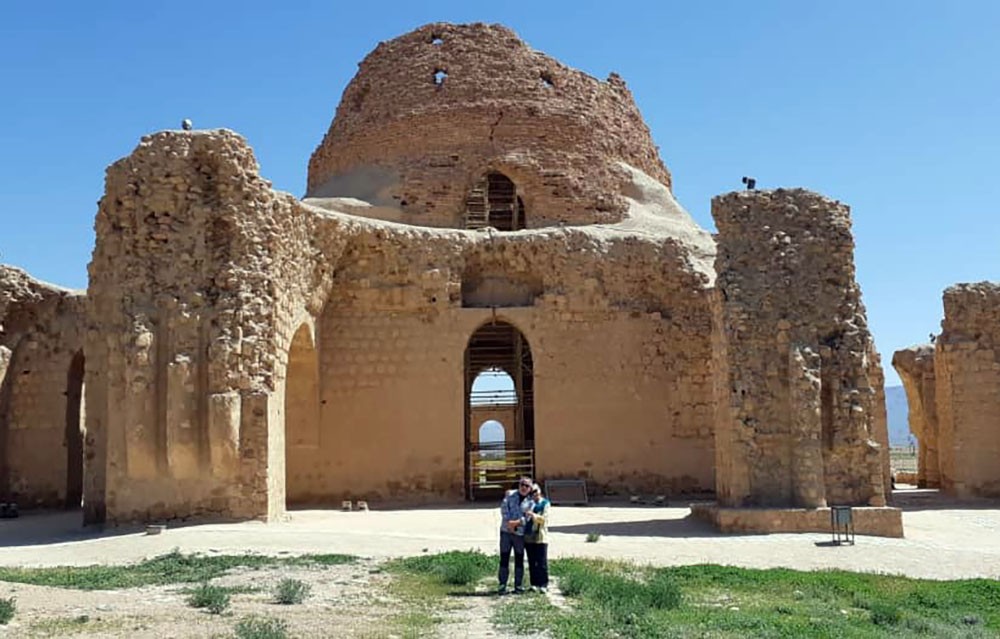 The Sassanid Sarvestan palace as a UNESCO world heritage site is worth a visit and you can visit it while you travel to Shiraz Salt lake or if you are on your way from Shiraz to Kerman. 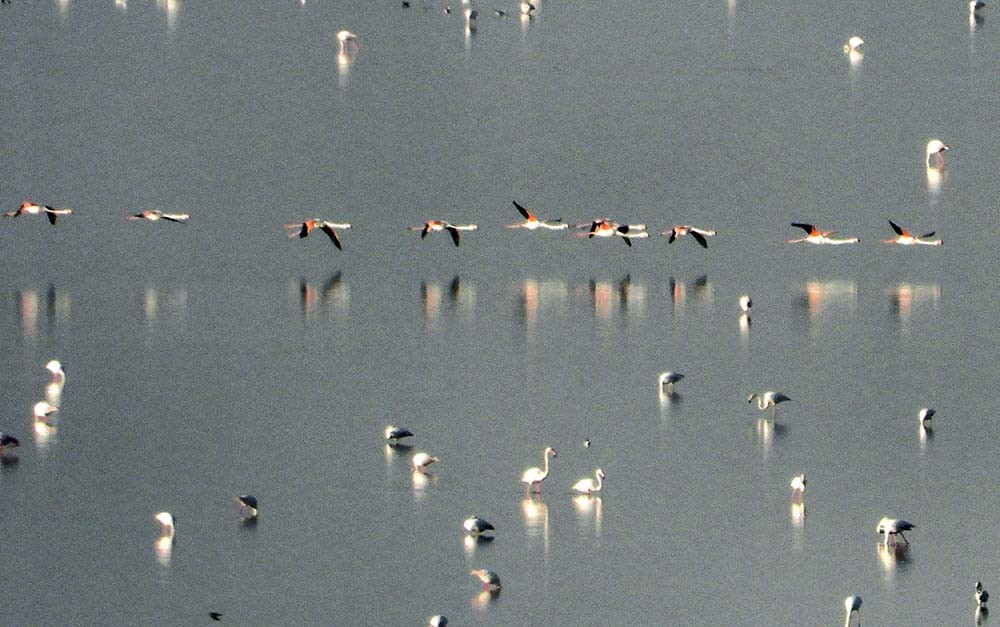 Maharloo Salt lake or Pink Lake is located 30 KM Southeast of Shiraz and if you come at the right time you may have a chance to see the flamingos in the lake. If you drive to the lake in summer time you can see a large part of it all salt but in rainy seasons the area is covered by water and you can go boating. April and May are the best months to visit the lake and go bird-watching.

You can book a guided day tours in Shiraz with us or if you book a tour package around Iran, we have already included Shiraz in many of the trips especially if it is your first trip to Iran.
Book a Shiraz Tour
Explore The Traditional Clothing Culture Of Iran
IRAN ON WHEELS : AN ADRENALINE PUMPING ADVENTURE